High Plains Fellowship began in 2016 with a calling.  Pastor Paul and his wife, Rhonda, moved to Lamar in April 2016 with the call of God in their hearts.  They quickly came to know and love the people God had called them to serve.  By June of 2016, a small group began to meet for Bible study in the Floyd's home.

By the end of 2016, the group had grown in number and the Floyd's living room was beginning to fill up.  After prayerful consideration, the group (now calling themselves High Plains Fellowship of Lamar or HPF) felt it was time to begin meeting in a public place for corporate worship.

On Sunday, January 15, 2017 at 11:00 a.m., HPF met for public worship for the first time at their new meeting place: The Colorado Room at the Cow Palace.  Throughout the year, attendance increased and membership grew. 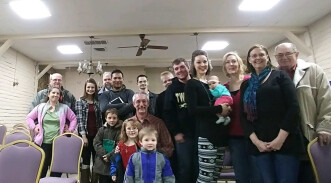 By the fall of 2017, it was clear to the church that God was leading them away from the Colorado Room to a place of their own where they could better serve the town of Lamar in the name of Jesus. On December 15, 2017, HPF purchased the old Lamar Daily News building at 310 S. 5th Street.

The former office area in the front of the old building had been recently carpeted and was only in need of a little cleaning and painting to make it usable as a worship area. On December 24, 2017, High Plains Fellowship met for the first time in the new building God had provided.

The rest, as they say, is history.  God has continued to bless HPF as they use the "new" building as a launching pad for service into the community.

"And he said to them, “The harvest is plentiful, but the laborers are few. Therefore pray earnestly to the Lord of the harvest to send out laborers into his harvest"." - Luke 10:2